These events are held in the Reading Room in Avon Dassett. They are not held on a regular basis but occur two or three times a year. A date has not yet been fixed for the next event but keep a look out for information on these pages and on the Events/News sections of this website.

The teas are organised by Deb Watts and for more information she can be contacted at ‘Sinclair’, Avon Dassett or email her.

How It All Started

My love of china started from a very young age and I collected vintage saucers. There were no cups back then as it was easier to store just saucers. Years later, realising that my large collection was being stored in boxes unused and unloved, I decided to put it on show. What better way than with tea in the cups and chocolate cake on the plates!

Serving tea and cake in exchange for a donation to charity has proved very popular and a lovely way to socialise whilst raising money and awareness.

The red, white and blue bunting which goes up for each event was given to me by a friend when she was having a clear out, it was some made by her mother for the Silver Jubilee in 1977!

The events would not be the great success they are without the help recieved from family and friends and continued support from the village. Thanks must go to my sister who bakes cakes and my friend Maggie who helps to serve them on the day. Also my friend Jackie who sources many of the tombola prizes and sells tickets on the day. Special thanks go to my mother Dorothy who bakes cakes, makes the tea and does all the washing up!

We had a very busy couple of days in The Reading Room with a great turn out of people, around 60 in total. Including donations received beforehand, Macmillan Cancer Support received £416.68. Huge thanks to everyone who supported this event, and to those who baked cakes, donated prizes for the tombola and helped out on the day. Thanks also to Stu Allsopp for taking the photos.

The “Spot the Double Shot” game was won by James Lovell who correctly guessed the coffee cup with the “ship” on it as the winning cup.  His prize was an Amaretto Latte Coffee Hamper. 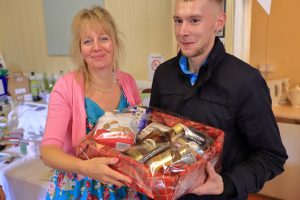 With the Earthquake in Nepal still in our thoughts, The Red Cross was chosen again, to be the charity benefitting from our tea drinking, and a great total of £284.81 was raised.  Sarah Rutherford chose the Lucky Square to win the “Tea on the Beach Hamper”   www.redcross.org.uk

The Vintage coffee pots came out again, this time over two days, as part of Macmillan’s World’s Biggest Coffee Morning, raising a grand total of £402.57. www.macmillan.org.uk

Despite the rain, many turned out for the Vintage Style Coffee Morning held on 9th November. Along with the coffee and cake there was a tombola, bric-a-brac and guess the number of coffee beans in the jar. Phil Baxter, whose guess was the nearest to the number – 2230, won the prize of a coffee hamper. £293.30 was raised for Macmillan Cancer Support as part of their World,s Biggest Coffee Morning Event.

With the snow just about gone, and with the sun trying to shine, the Vintage Style Afternoon Teas on 7th April was well attended. This time the event was held at Shutford Village Hall in memory of Maureen Sabin. £452.07 was raised for Leukaemina and Lymphoma Research and after hire costs an additional donation of £28 was made to Shutford Village Hall.

This was a special request from a villager in memory of his wife Patricia Mitchell who died in 2010. There was a record turn out of villagers and a wonderful atmosphere in the Reading Room. Felix Batty won ‘Guess the name of the wolf’ who was called Louis.

The Brain Tumor Charity is the UK’s largest dedicated brain tumor charity. they funbd scientific and clinical research into brain tumors and offer support and information to those affected, whilst raising awareness and influencing policy.

Coffee instead of tea this time as part of Macmillan’s “World’s Biggest Coffee Morning” which raised around £15 million throughout the country.

Macmillan Cancer support help with all the things that people affected with cancer want and need. They also support carers, families and communities and fund and build cancer care centres.

As it was the Queen’s Diamond Jubilee year this event had a jubilee theme and the Royal Jubilee china was out on display. It was organised via the Shutford branch of The British Legion and we got a mention in their newspaper and on their website:

The British Legion provide financial, social and emotional care and support to all members of the British Armed Forces past and present and their families. Founded in 1921, the Legion is not just about those who fought in the two World Wars of the last century, but also those involved in the many conflicts since 1945 and those still fighting for the freedom we enjoy today.

As well as being the birthday of the founder of the Red Cross, 8th Mayis also Dorothy’s birthday. The weather was kind to us as the rain held off between the sunny spells and we saw lots of new faces. Mum had a lovely birthday too, even if she did have to bake the cakes herself!

The British Red Cross helps people in crisis, whoever and whereever they are. They are part of a global network of volunteers, responding to natural disasters, conflicts and individual emergencies.

After being given the family teaset by a friend, this event was held in memory of her mother.

The Alzheimer’s Society is the UK’s leading care and research charity for people with dementia, their families and carers.

Gladys from the Red Cross:

that’s a fantastic result! I was a little worried that it might have been snowed off, but British people are very resilient where tea is concerned!! It would be great if you would consider holding a similar event for us in Red Cross week next year. The 8th May was Henry Dunant’s birthday, founder of the Red Cross

This was the event that started it all off after seeing the leaflet in the doctors surgery.