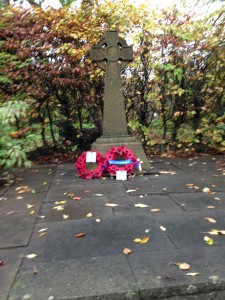 In October 1925 Bishop of Coventry dedicated the war memorial at Avon Dassett. The War Memorial was situated in the churchyard of St John the Baptist, Avon Dassett, built of Hornton stone. The mason was probably J. F. Booth and Sons of Banbury.

At the 1967 Annual Parish Meeting it was agreed to move the village memorial from its ‘inaccessible and unnoticed position to a more central village site’. Land for the memorial was gifted by Mr A Wood. The cost of relocation, building the wall and steps and the beech hedging was estimated at £140. Donations of £120 were received from villagers.

On Sunday 10th November 1968 a rededication ceremony took place. In attendance were Parish Council members, the British Legion, clergy from the Methodist and Catholic churches, Sunday School members, Ladies of Avon Dassett Social Club, RAOB members, villagers and relatives of the men named on the memorial. The National Anthem and ‘Oh God, Our Help in Ages Past’ was sung. Reverend J White, Rector of Avon Dassett, made the dedication assisted by the Roman Catholic priest, Peter Moore, the Methodist minister, the Rev. Kenneth Cheeter, and the local British Legion Chaplain, the Rev. W. A. Richards, rector of Warmington. Wreaths were laid by the Chair of the Parish Council, the British Legion, families and friends. The Last Post and Reveille were sounded by the bugler.